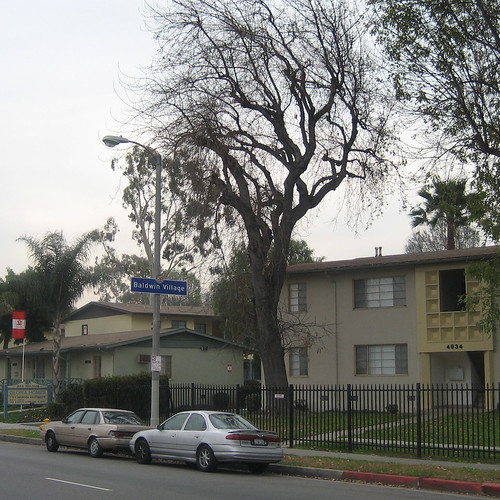 Baldwin Village, alternatively known as The Jungles is a community in Los Angeles, California. This dense, twisty, one-way-in-one-way-out stretch of dead ends is thought to be one of Los Angeles’s most dangerous neighborhoods. This little enclave, a bit west and south of West Adams, has irregular boundaries but begins basically at Coliseum and Crenshaw Blvd. and spreads out west and south of there for 10 or 20 blocks with its western border generally given as La Brea and the south as Santo Tomas Drive. Baldwin Village consists largely of two-story, apartment buildings of 10 or more units, often surrounding a swimming pool, built in the late 1950s. It is officially part of the Crenshaw district, an area of Los Angeles that has gone through drastic economical changes. Originally occupied mostly by adults, young families not yet able to afford homes began to move into Baldwin Village around the same time that de-segregation triggered White flight in the early 1960s. Baldwin Village is adjacent to one of the most affluent African American neighborhoods in Los Angeles, Baldwin Hills. The projects are often referred to as "The Jungles" originally because of its appearence with vegetation etc, but in recent time because of its high crime rate. The neighborhood was and is controlled by the Black P Stones, a Chicago-based gang long integrated into Los Angeles’ enterprising Blood network.