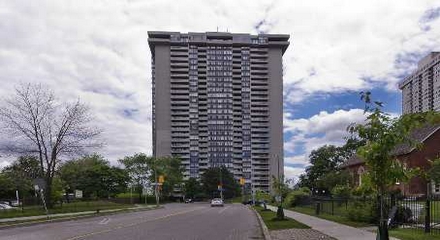 2 and 5 Brahms Avenue are two aging social housing high-rise apartments located on the north side of Finch Ave. East just west of Don Mills Road in the northeast suburb of the former city of North York section of Toronto, Ontario, Canada. Completed in 1976, these two buildings were bought by the TCHC and became home to many poor and new immigrant families, many of whom hailing from the Caribbean Islands and various African nations. Unlike the other neighborhoods in the 4 Corners, Brahms Avenue is a normal road with no dead ends. After a period of a low criminal activity around the area, Brahms began seeing an emergence of roaming youth gangs claiming allegiance to the ABG set by 2001-02, who became involved in a number of criminal activities including vandalism, robbery, and the proliferation of narcotics. This neighborhood is considered part of The Peanut, named because of a peanut shape plot of land created by the divergence of the north and southbound lanes of Don Mills Road north of Sheppard Avenue East and south of Finch Ave. East. The Brahms high-rises makes up one section of the area known as 4 Corners.

Man Shot & Robbed In The Park at Don Mills & Finch