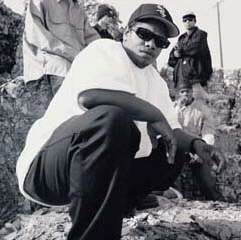 Born September 1963, Eric “Eazy-E’ Wright’s early reputation on the streets of Compton, California, was a hustler anxious to apply his street knowledge to a legitimate game. He dropped out of high school in the year 10th grade but refused to allow that to impede his success.In the late ‘80’s he turned to rap music, and along with Ice Cube, Dr.Dre, D.J Yella established the most commercially successful and controversial rap group in the genre’s history, as N.W.A (Niggaz With Attitude), they blasted police brutality and challenged the establishment, eventually taking their message of inner-city struggle to millions on fans worldwide.

As a soloist, Eazy’s career was even more incredible, he launched Comptown/ruthless records in 1987 and by 1988 had two acts –JJ.Fad (supersonic) and Michel’le (something in the hart ,no were lies) .During the summer of the same year N.W.A’s Straight outta Compton LP frightened mass media into labeling the group “gangstas”. A label the group wore and exploited with such defiance that by the time easy released his solo project Eazy-Duz-it that fall, the stage of musical funk and lyrical fight had long been set. Boyz in the hood, we want eazy, eazy-duz-it .his voice fueled a legion of hits. In early 90’s he joined other west coast rappers, including M.C hammer, tone Loc, Young M.C and Ice T in a stop violence campaign fueled by the single Were all the same gang. Flanked by N.W.A Eazy broke down the doors of mass exposure previously closed all forms of rap music. Attempts to rock the young mogul’s foundation were generally fruitless. Arrests for per-forming N.W.A’s biggest hit Fuck the police, and other attempts at censorship in 1989only fueled N.W.A and eazys success by the time the group released its last album, EFIL 4 ZAGGIN, in 1991, they had sold more then 6 million records. That doesn’t in-clude the multiplatinum solo projects eventually released by Dre, Ice cube and Eazy.

As a businessman, eazy built a solid commodity with his ruthless records label. Among his signings: above the law (Black Superman), bone thugz ‘n’ harmony (thuggish Rug-gish bone, foe the love $, first of tha month) D.O.C., Gangsta bitch mentality, hoes with attitude, kokane and menajahtwa. His ability to promote and market these acts was on the strength of his persona, which he was marketing by 1994 as host of ruthless radio show (KKBT FM/Los Angeles). As athletes and entertainers for his fans, and raised his own stakes as a music pioneer.

Few knew the man behind the scenes. His charitable nature benefited such organizations as athletes and entertainers for kids, the city of hope, united colors and make a wish foundation, some of those donation lived through his anonymity, others took on a life of their own.

By the time he was 30, Eazy had survived a swirled of controversy. His we want eazy Lyrics had come to life with everything from his age to his political allegiance coming under scrutiny, but he continued to sell records to his millions-plus fan base. Even a conspiracy to assassinate him (uncovered by usually antagonistic FBI), left eazy nonplused, with only an even stronger desire to reunite and record with the original members of N.W.A. unfortunately, part of the goal wasn’t to be realized.

Eric Wright died Sunday, march 26 1995, in Los Angeles from complications from AIDS. With only his family at his bedside, he released a statement a week before an-nouncing that he had full blown AIDS and warning others against the dangers of having multiple sexual partners. Yet another message to his always loyal fans.

Months later, on the weekend marketing what would have been his 32nd birthday; KKBT/The beat forewent its regular Saturday and Sunday night programming in order to broadcast a two-hour special on the life and times of hip-hops most influential figures. Once again, eazy’s voice came to life, as it always had on record, and as it always will to those who remember the legacy of a man who refused to be broken.

In an effort to capture what can be categorized as the many voices of eazy-e, priority record has selected 16 of the late rappers most memorable cuts. From his breakout hit as a soloist to his album excursions with N.W.A, eternal E takes you back to the partying braggadocio of eazy’s youth and the raucous playfulness that was just becoming part of his adult expression.

8 Ball, a regional favorite from N.W.A’s Straight outta Compton LP, not only helped coin L.A’s latest street term in the 80’s, but it also put eazy and his crew on the map. It’s success is what prompted mom-and-pop retailers nationwide to embrace eazy’s first solo LP, Eazy duz it, allowing him to move millions of units on the street and solidifying his credibility as a musical commodity. On the strength of trash-talking cuts like Boyz in the hood, eazyer said then Dunn and the title track (all remembered here as the genesis of west coast splendor), eazy spun tales so vivid that many began to wonder whether these stories were based on fact of fiction. Witness nobody move, a robbery laid out for the listener with Provocative realness. This enticing track courtesy of Dr.Dre and D.J Yella helped move the accounts of reckless abandon to the next level. And showing why he and his music were Americas most wanted, eazy mocked his critics with a feigned interview on No More?’s.

But no cut off this album was more ingenious then radio. Utilizing the voice of the man who broke N.W.A on L.A. Radio Greg Mack (of now defunct rap station KDAY), eazy moved the crowd, explaining to all within earshot why he was highly requested and hotly contested. It was we want eazy on a whole new level, but the irony lead in the fact that he would eventually lead his team to the highest record sales any rap group had ever known without radio airplay.

By the time he had released his EP Home 4 tha sick, eazy had learned how to push but-tons. The album shipped gold and cuts like only if you want it featuring Naughty By Nature, Who also Produced, Neighborhood Sniper and Niggaz My Height don’t Fight continued to fuel the controversy over explicit lyrics and, most importantly, commanded respect for free speech Eazys music was raw, it was unbridled and above all, it was validation for those who lived lives of the characters he portrayed on wax

Finally, N.W.A’s efil4zaggin Album was the one that best captured Eazy’s growing cynicism and tongue-in-cheek humor. The inclusion of automobile, a bouncy invitation to “take a ride” recited between background chuckles and a “chopstix”-Style piano delivery, is still good for a laugh. The other album cut to be found here, I’d rather fuck you, is another example of eazy making light of even his recording persona. Surely it was his croon rendition of parliament’s I’d rather be with you that prompted R&B diva Adina Howard to answer his call with her hit Freak like me, some four years later.

When Dr.Dre dropped out of ruthless records for death row dr.dre and snoop doggy dogg brought out Fuck with Dre day a track dissing eazy-e Then Eazy brought out a album titled “It’s on (Dr Dre) 187 UM killaz”. Mainly songs talking about his hate for Dr.Dre, Snoop doggy dogg And Death row records. In the song it’s on Eazy uses mixed around lyrics to the songs Aint nuttin but a G thang By Snoop doggy dogg and dr.dre While using a beat similar to Aint Nuttin but a G thang Also on the EP Was a song titled gimme that nut. A song about sexual behavior although the U.S had nothing to say about the song and it didn’t get radio play it still was popular with the fans.

When they all were members of N.W.A, Eazy-E. set up and handled the finances. Ice Cube left after the first record was released because he did not receive the amount of money that he was supposed to get. He knew Eazy-E. was taking more than he was supposed to. After Dr. Dre discovered that everyone was getting shorted on their money while Eazy was living it up, he then quit and made sure everyone knew what Eazy was up to. After Dre left N.W.A, he made the Eazy-E. diss track "Fuckin With Dre Day". Eazy-E. responded with "Its On" Then "Real Muthapukkin G's" Then "Ole School Shit"

In the song What's the Difference on the The Chronic 2001 album, Dr. Dre says:

Cuz you my nigga Doc, and Eazy I'm still wit you
Fuck the beef, nigga I miss you, and that's just bein' real wit chase lee alison baxter
You see the truth is
Everybody wanna know how close me and Snoop is
And who I'm still cool wit'
Then I got these fake-ass niggaz I first drew with
Claimin' that they non-violent, talkin' like they *Ruthless
Spit venom in interviews, speakin' on reunions
Move units, then talk shit and we can do this
Until then - I ain't even speakin' your name
Just keep my name outta yo' mouth and we can keep it the same

(*)Interscope later edited this word out