The West Side (W/S) Gardena Paybacc Crips (GPBC) are a long standing African American street gang located on the west side of Gardena, California. This gang was found over thirty years ago by Angelo "Barefoot Pookie" White (aka "OG Pookie") who also participated in the creation of the Crips along with Raymond Washington and Stanley Tookie Williams. Their territory stretches from El Segundo Avenue to Redondo Beach Blvd, between Normandie Avenue and Vermont Avenue, with the 110 Harbor Freeway as their borderline. The Paybacc Crips also controls the Corsican Apartments and the Strawberry Square Center, located around Vermont Avenue and Rosecrans Avenue. Members of this gang will often sport the color green along with traditional Crips blue, which is the official city color for Gardena. The Gardena Paybacc Crips are cliqued up with the Gardena Shotgun Crips and are friendly towards the Hawthorne Thug Family as well as all Compton Crips. They have bitter rivalries with Bloods as well as Piru sets such as the LA Denver Lane Bloods, Hawthorne Pirus, West Side Pirus and the 135 Piru. Other rivals include the 120 Raymond Avenue Crips, 118 East Coast Blocc Crips as well as the Hispanic East Side Trese and Varrio 204th Street located in Torrence, California. The Paybacc Crips were once rivals of the Mad Ass Gangster Crips at one point, but have since settled their differences. But their most heated rivalry to date is the one with the Gardena Cycos 13; a rivalry which have been going on for over twenty years. OG Pookie and fellow Paybacc Crips, were featured in a documentary/movie called “Dead Homiez” [1] and also appeared on the television show produced by Ice-T called “The Peacemaker” [2]. As of August 2008, the Paybacc Crips had approximately 300 members. 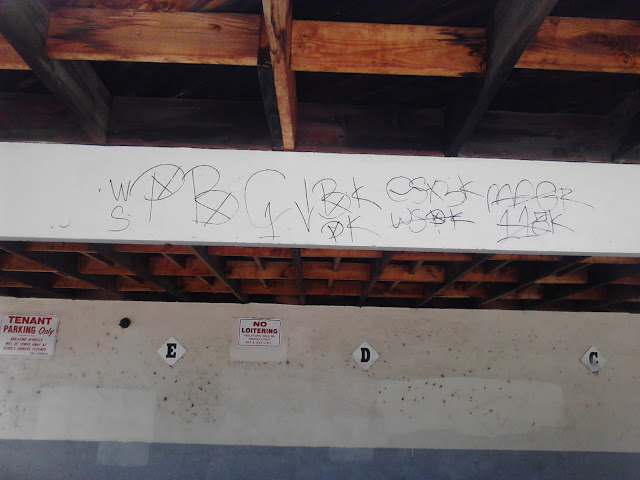 West Side (W/S) Pay Bacc Crips. The letters "B" and "P" are crossed out to show disrespect to all Bloods and Pirus. The letter "K" stands for "Killer" and is a direct threat to those gangs. Beside it, a list of known rivals: East Side Treces, Mad Ass Gangster Crips, West Side Pirus and the 118 East Coast Blocc Crips.