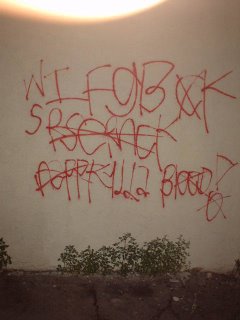 The Inglewood Family Gang started around 1971 before the Blood Alliance was formed. It is believed that the IFs were started by Jan Brewer. They are the largest gang in Inglewood and their subsets include 77th Street, Rollin' 80s, 92nd Street, and 94th Street. Most of their area is policed by the Inglewood Police Department but a small portion of their turf lies in the 77th Division of the LAPD. The Inglewood Family Gang was sanctioned into the Bloods Alliance as a West Coast Bloods Set in 1972. Some of their rivals include the Rollin 60s Neighborhood Crips, the Rollin 90s, Rollin 100s, the Neighbor Hood Pirus, Queen Street Bloods, the Black P Stones, Inglewood 13, the 104 Hard Time Hustler Crips , 99 Mafia Crips and Imperial Village Crips. They used to rival the Eight Tray Gangster Crips, but they are now in an unofficial peace alliance to take on the Rollin 60s Neighborhood Crips and the Rollin 90s. Their closes allies are the Avenue Piru Gang, the Crenshaw Mafia Gang, the Family Swan Bloods and the Centinela Park Family.

1: Have an alliance with the Avenue Piru Gang, called "Family Rus".

2: Have a small independent Blood click/gang in their hood called the Ransom Gang.

3: Are at war with the Black P Stones Bloods.

4:They have a unofficial peace treaty with the Hoover Criminals to take on the Rollin 60's called "Suwoopin and Groovin"