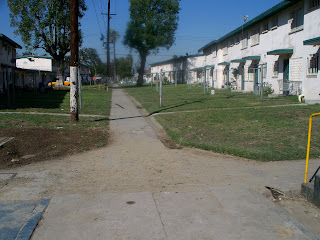 Jordan Downs Housing Projects is a 700-unit public housing apartment complex in Watts, Los Angeles, California next to David Starr Jordan High School. It consists of 103 buildings with townhouse style units ranging in size from one bedroom to five bedrooms. The complex is owned and managed by the Housing Authority of the City of Los Angeles (HACLA). The complex is bounded by Grape Street to the west, 97th Street to the north, Alameda Street to the east, and 103rd Street to the south. The complex was originally developed as semi-permanent housing for war workers during World War II. In the early 1950s, HACLA converted it to public housing; it was among the last of the public housing projects in Watts to be opened for that purpose. It opened in 1955, shortly after new mayor Norris Poulson ended all new public housing in the city. Across the next four decades, Jordan Downs and the other project houses came to be seen as microcosms of the ills of society: either of the dependency of individuals on the welfare state, as conservatives argued, or of institutional racism, lack of access to education and jobs, and the cycle of poverty, as liberals argued. The rapid decrease in manufacturing jobs in Los Angeles depressed the area; at the same time, the concentration of impoverished citizens, combined with a pervasive sense of disenfranchisement and official indifference or hostility, made the housing projects likely breeding-grounds for crime. Jordan Downs was one of the flashpoints of the 1965 Watts Riot. Like the other housing projects, Jordan Downs benefitted relatively little from the influx of federal money and attention that followed the riots. In the seventies and eighties, despair about the post-war model of public housing and declining federal spending in this area served to further dilapidate this and the other area projects. By the mid-1980s, Jordan Downs was probably most famous among the general public as one of the homes to the newly-prominent street gangs: in this case, the Grape Street Watts Crips. In the early 1990s, Jordan Downs witnessed the same social changes that marked the city as a whole. The changing demographics of Watts were reflected in tenancy at the project, as Latin American tenants began to make inroads into the long-sizeable African-American majority at the facility. This transformation, though generally peaceful, was accompanied by occasional tension.