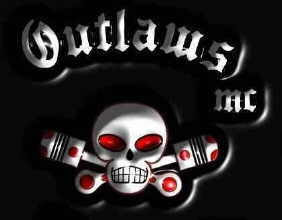 The McCook Outlaws Motorcycle Club is a 1%er Biker gang established out of Matilda`s Bar on old Route 66 in McCook, Illinois, U.S.A. just outside of Chicago in 1935. Although the Club stayed together during World War II, like most organizations at that time, the Clubs activities were limited. In May of 1946 the first major post war motorcycle event in the midwest was held at Soldier Field, in Chicago, Illinois. By 1950, the Outlaws MC had swollen from its' original charter members of 1935 and grew in size, with members from all over the Chicago area. The Club decided to change its` name from "The McCook Outlaws" to The Chicago Outlaws and moved out of McCook, re-establishing itself in Chicago. It was also around that time the club decided to completely change its official logo. A small skull replaced a winged motorcycle and old english style letters were adopted. This design was embroidered on a black shirt and hand painted on leather jackets.

On July, 4th 1964 the "Gipsy Outlaws" from Milwaukee joined the Outlaws MC organization. During the Springfield Motorraces in August, they were followed by the "Gypsy Outlaws" from Loisville (they had no former contacts at that time with the Milwaukee Club). These chain of events helped set the stage for what would be known as the "Outlaw Nation", with Chicago as the Mother Chapter. 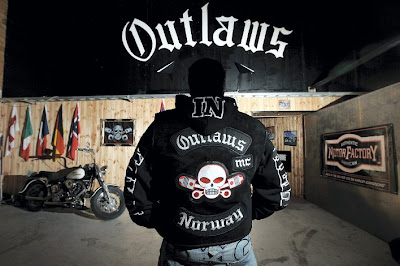 On the 1st of January 1965, the AOA - American Outlaws Association - was born. The backpatch of the club, skull and crossed pistons, is named "Charlie" while the slogan "God forgives, Outlaws don't" becomes the club's official motto. The 1960's saw the Outlaws MC expanding to other states such as Florida and by the late 1970's, the club had expanded (for the first time) outside of the United States and into Canada as former members of the Satan's Choice MC patched over and became Outlaws MC. By the early 1990's the Outlaws MC had expanded into Europe with chapters in France, Norway, Germany and Austrailia. The Outlaws today exist as one of the largest Motorcycle Clubs worldwide. The group has active chapters in Japan, the Philippines, Spain, Serbia and Austria, Switzerland and Czechia. Members of this gang are known to be extremely violent and are sworn enemies of the Hells Angels, Bandidos and The Rock Machine.