Parkdale is a neighbourhood and former village in the city of Toronto, Ontario, Canada, west of downtown. Bounded by Dufferin roard to the east, Roncesville to the west, Queen street to the north and the Lakeshore to the south, it began as a residential suburb, was incorporated as a village in 1878, became a town in 1885 and was annexed to the city in 1888. The area changed dramatically with the building of the Gardiner Expressway in 1955, demolishing the southern section of the neighbourhood together with the Sunnyside Amusement Park, and the creation of a barrier between the neighbourhood and the Lakeshore. Apartment complexes, such as those lining Jameson Avenue, are home to many of the neighbourhood's residents. Parkdale is one of the most diverse areas of the city, with many new immigrants finding their first homes here because of the high concentration of low-rent apartment complexes and proximity to the downtown core. The presence of a large immigrant community has done much to create the vibrancy and personality that Parkdale is known for. This may be a fact of the streetscape in Parkdale, but it remains an area rife with substandard rental apartment buildings (a large percentage of Parkdale residents are renters) run by landlords who are considered slumlords by many local residents. As property values plummeted, swaths of land were expropriated to erect social housing. In the mid 1980s, the Ontario provincial government decided to release many long-term care mental illness patients from its Queen Street and Lakeshore Psychiatric Hospital facilities as a cost-cutting measure. The old Victorian mansions of Parkdale had long been converted to boarding houses. For the majority of the 1980's and 1990's, prostitution and drug use have been issues of concern to many in the community, but so has police harassment of street people. For a long time, perceived inaction by different levels of government had prevented the situation from improving; in fact, living conditions in Parkdale were deteriorating as the buildings got older with each passing year. Unlike Regent Park and Alexandra Park, there is no urban renewal project in the works for Parkdale. However, Parkdale is seeing increasing signs of gentrification, as Queen Street West's sphere of influence extends further westward. "Hipster" cafés, lounges, restaurants, condominiums, shops, and art galleries are cropping up, and former "dive" hotels such as the Drake and the Gladstone have recently been purchased and renovated in a trendy manner. Local taverns have begun receiving new patronage from artists and urbanites seeking refuge from the fashion boutiques farther east on Queen Street West. It is rumoured that Parkdale is not only home to a small street gang under the Crips umbrella, but also to members of the Hells Angels' downtown Toronto chapter aswell since they were rousted from their Eastern Avenue clubhouse in a high profile police raid in 2007 [1]. 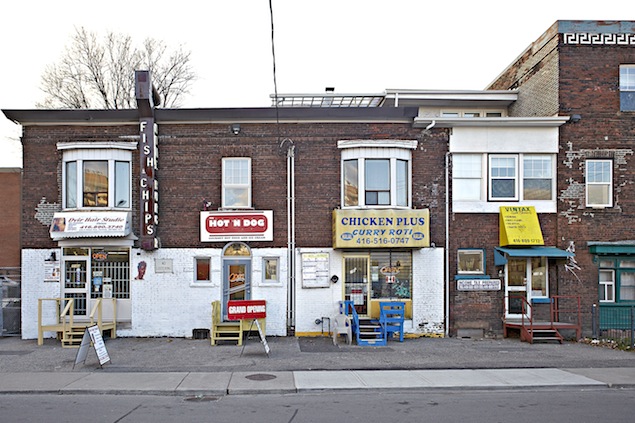