The West Side (W/S) Rollin 30s Original Harlem Crips, also known as the "Original Harlem Crip Rollin 30s", the "Original Harlem Mafia Crips" or simply "The Dirt Gang", are a long standing African American street gang from West Los Angeles, California. Their history makes them one of the oldest Crip gangs on the west side. Their territory is located in the southwest section of Los Angeles and is the second largest turf of all black gangs in Los Angeles, slightly smaller than the turf of the Eight Tray Gangster Crips. Beginning from the Jefferson Park area, the Rollin 30's originally called themselves the "Harlem Godfathers" and consisted of The Avenues, Denker Park and 39th Street cliques; where the oldest members came from. The 35th and 37th Street cliques emerged during the mid 1990′s and consists of younger members of the gang. Each clique have assigned "shot-callers" to direct the gang's criminal activity. Law enforcement estimates there are between 700 and 1000 Rollin' 30s gang members. Their territory is about 2.04 square miles between Jefferson (north) and King Blvd (south) and Crenshaw blvd. (west) and Normandie (east). A portion of their turf extends further east to Vermont between Exposition in the north and King Blvd to the south. A common hand gesture used by members to represent the gang is to point two thumbs upward to represent the 'H' in "Harlem" [1]. Members are also known to sport Texas Rangers and Texas Longhorns baseball caps with the logo letter “T” to represent “30s”. The Rollin 30's Harlem Crips have engaged in bitter rivalries with both Blood and Crip sets. Their fiercest Blood rivalries are with the Rollin 20s Neighborhood Bloods, located north of their territory, and the Black P. Stones Jungles to the west. Both rivalries have been going on for over 30 and 20 years respectively. Other Blood rivals include the Bounty Hunters Watts, Van Ness Gangster Brims, Fruit Town Brims and the Harvard Park Brims. Crip rivals include the Eight Tray Gangster Crips, 52 Broadway Gangster Crips, 53 Avalon Gangster Crips, the Gardena Shotgun Crips all Hard Time Hustler Crips, Front Street Watts Crips and the School Yard Crips. The Harlem 30s are also bitter rivals of the Hoover Criminals, in particular the 43 Hoover Criminals Gang, 52 Hoover Gangster Crips and 59 Hoover Criminals Gang. They were once considered enemies of their former allies the Rollin 40s Neighborhood Crips to the north of their turf since approximately 1996 [2]. It was widely rumored that the Rollin 40’s were responsible for the shooting death of a Rollin 30’s member which sparked a tit-for-tat series of retaliatory shootings. Although that feud came to an end around 2006, it left the Rollin 30's disenfranchised with other Rollin 0’s gang. The Harlem 30s have traditionally been friendly toward gangs under both the Neighbor Hood Crips and Gangster Crips card including the Rollin 60s Neighborhood Crips, Rollin 40s Neighborhood Crips (excluding "The Darkside 40s" clique who some members still consider rivals), Rollin 90s Neighborhood Crips, Rollin 100s Crips as well as the 4 Pacc. Other allies include the Grape Street Watts Crips, Holmes Street Watts Crips and Bacc Street Watts Crips. The Rollin 30's are also friendly towards the Hispanic Alley Tiny Criminals 13 gang as well. Although the Harlem 30s are a Rollin 0's gang, they fall under the Blocc Crips card and do not fall under or claim the Neighbor Hood Crips card. Law enforcement estimates there are between 700 and 1,000 active members of the Rollin 30s Crips with members who can be found in different parts of the world such as New York City and Belize. The Rollin 30's have a sizable Belizean membership who would bring Los Angeles gang culture to their homelands upon deportation; exporting foreign rivalries to the Caribbean nation. The Rollin 30s are unique in that they originate in Harlem, New York and tend to be older than the typical active gang member in South Los Angeles, which translates into an average age of 30s-40s rather than teenagers and young adults in their 20’s. 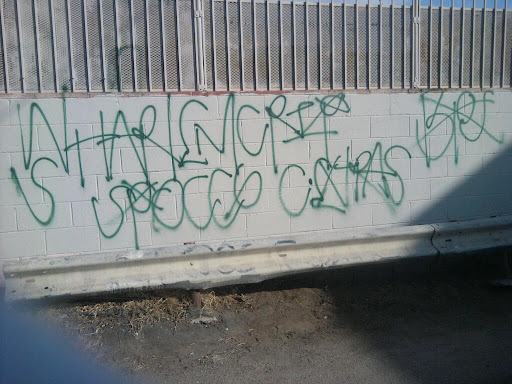 West Side Harlem Crip. Below, the names of the taggers and beside it, a direct threat to the Black P. Stones. 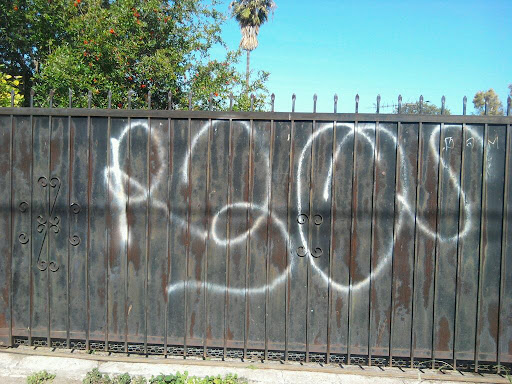 39th Street Harlem Crips' tag crossed out by Fruit Town Brims' 36th street faction. The "W" and "S" stands for "Westside" in reference to their location, a small "R" for "Rollin" and a large "T" with a "C" through it for "Thirties Crip". "OHC" means "Original Harlem Crip". Here, they've listed this clique's main enemies: Fruit Town Brims and the Rollin 40s Neighborhood Crips. The Fruit Town Brims have crossed out the tag, added a "K" at the end of "OHC" and highlighted their name in the enemy list. They also wrote "36" to signify the street they claim and wrote & crossed out "39", which is the clique of the Rollin 30's that wrote the original graffiti.