The Loners Motorcycle Club was first formed in Ontario, Canada in 1979 with a handful of chapters, including a now-defunct one in southwestern Ontario, Canada that was headed by Wayne Kellestine. As part of its Ontario expansion drive, the Hells Angels tried to persuade the St. Thomas Loners chapter to join them. Kellestine — who was injured in an assassination attempt in 1999 — resisted [1]. The club has expanded to the United States and Europe, but in Ontario, its highest profile in recent years was a legal fight by a Toronto chapter to keep its mascot on its property north of the city, in 2001. The neutered, declawed lion named Woody was moved to an animal sanctuary. They have 8 chapters in Ontario. They have recently set up chapters in Lindsay and in Peterborough, which is in the old Outlaws MC clubhouse but is now their home. 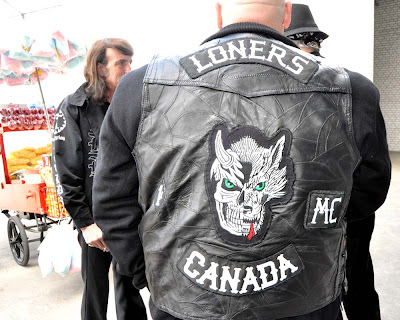 The Loners have always maintained that they aren’t a criminal organization and have said that they are little more than a social group that’s received a bad reputation from the press and police.

Pammett Voted Out of Loners MC