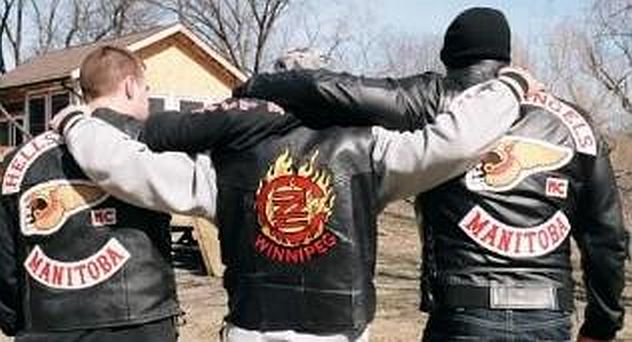 The Zig Zag Crew is a street gang consisting of mainly (but not exclusively) wayward Caucasian and Aboriginal criminals which serves as an under-link or "puppet gang" to the more organized Hells Angels chapter in Winnipeg, Manitoba, Canada. Unlike other street gangs, membership to this gang cannot be achieved by means traditionally linked to street gangs such as being "jumped-in" or by committing some act of violence or delinquency. The Zig Zag Crew are more structured than most street gangs and model their recruiting tactics after Biker gangs, by having a hierarchy of membership from "prospects" to "full-fledged" members, patches and ranks. Since the Zig Zag Crew are closely aligned to the Hells Angels, their main rivals would be The Rock Machine and the Manitoba Warriors gang, who constantly challenges them for control of the drug trade in Winnipeg, followed by the Central Gang and Loyalty Honour Silence. In certain prisons where their numbers are small, members of the Zig Zag Crew are known to have cliqued up with the larger Native Syndicate gang along with the Hells Angels and the Redlined Support Club. Members of the Zig Zag Crew can be identified by their tattoos and traditional biker vests with patches that sports the letters ZZC. There are over 60 members in the St. Boniface and Western area of Winnipeg, but some Aboriginal members of this gang come from the North End.

most of them are locked up now cuz one of the members snitched them out lol.