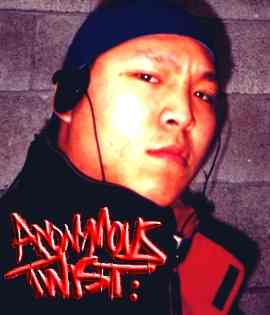 Anonymous Twist entered hip hop as a DJ in 1989. Now o days he finds himself with a microphone in one hand, a fader in his other hand, rapping and scratching to his own beats. As a trick DJ, now called a turntablist, the elements of manipulating sound on a record tapped into a previously unknown channel of creativity 'Twist had never experienced. One year later, at the age of 15 he placed 2nd in the Metro Mix-Off, a local DJ competition. There was something about turntable orchestration he found exhilarating; taking a record and making the orchestration of its sounds into his own. His past work includes:

-"What Da Phuk?" on the "Unsigned, Sealed and Delivered: Mass Destruction" compilation in 1993.