In 2005, Detroit ranked as the United States's 11th most populous city, with 886,675 residents; this number is less than half the peak population in 1950, and Detroit is among the leaders in the nation in terms of declining urban population over the past fifty years. It is the focal city of the naation's tenth-largest metropolitan area. Detroit's crime rate has brought it notoriety,[3] while the city continues to struggle with the burdens of racial disharmony between itself and its suburban neighbors. The city has experienced budget shortfalls,[4] leading to cuts in city services. The city's crime-ridden sections have brought it notoriety.[3] Detroit's crime figures are often among the highest in the U.S. The city is currently listed as the most dangerous city with a population over 500,000 by the Morgan Quitno's statistics,[77] but comes after St. Louis, Missouri overall.[78] Detroit is consistently in the top five for homicide rates. Murders peaked at 714 in 1974 (garnering Detroit the nickname "Murder City", a play on "Motor City") though the highest murder rate was recorded in 1991, when there were 615 homicides and the city's population was just over a million, which factors into a murder rate of roughly 60 per 100,000.[citation needed] In 2003, there were 361 homicides, the lowest count in recent years.[citation needed]

Many of these problems are blamed on the widespread white flight (which has contributed greatly to urban decay), poverty, de facto segregation of the region, and unemployment.[79] Some credit years of divisive, racially polarized government under Coleman Young with accelerating this flight;[citation needed] during the administration of Dennis Archer, who succeeded Young, Detroit saw middle-class residents moving into the city, and a larger growth in residential and commercial development. 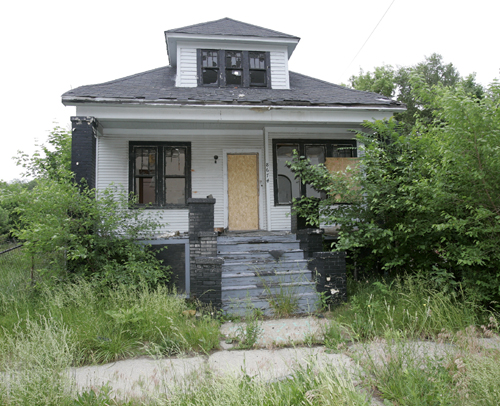 Abandoned and burned out shells of buildings are a frequent sight, with some 16,037 empty houses recorded in 1999. The city lacks funding to demolish the properties and the homes are often used for the production, sale, and use of illicit drugs, with drug gangs such as Young Boys Inc..[80]

The city has faced hundreds of arsons, often in the city's many abandoned homes, each year on Devil's Night, the evening before Halloween. The Angel's Night campaign, launched in the late 1990s, draws many volunteers to patrol the streets during Halloween week. The effort has reduced arson: while there were 810 fires set in 1984, this was reduced to 142 in 1996.[82]

From 2005 to 2006, the Detroit Police Department has more recently undergone large scale cuts and reorganization, cutting the number of precincts from 12 to 6 "districts." While the stated purpose of this reorganization was to improve services, it has resulted in widespread dissatisfaction within the Detroit Police Department, where members city such problems as overcrowding, overwork, greatly increased response times, and constant change in the administrative structure of the department as senior officers are moved, promoted, and replaced.[84]