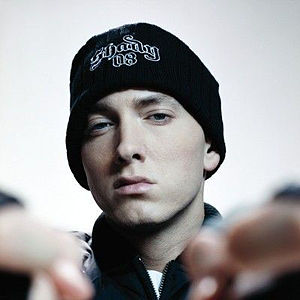 Using his wit to vent on everything from his unhappy childhood to his contempt for the mainstream media, his success became the biggest crossover success the genre had seen since Dre's solo debut seven years earlier. The controversy over his lyrics was the best publicity any musician could afford, and being the first Caucasian rapper to make a significant impact in years may have given him a platform not afforded to equally talented African-American rappers. A gifted producer as well, his talents always seemed overshadowed by his media presence, which was a misunderstood genius. Both may be true, but his message spoke to legions of disaffected youth who had few role models in the rap world who could relate to the white lower-class experience.

He was born Marshall Bruce Mathers III on October 17, 1972 in St. Joseph, Missouri (near Kansas City), spending the better part of his impoverished childhood shuttling back and forth between his hometown and the city of Detroit. Initially attracted to rap as a teen, Eminem began performing at age 14, performing raps in the basement of his high school friend's home. The two went under the names Manix and M&M (soon changed to Eminem), which Mathers took from his own initials. Due to the unavoidable racial boundaries that came with being a white rapper, he decided the easiest way to win over underground hip-hop audiences was to become a battle rapper and improv against other MCs in clubs. Although he wasn't immediately accepted, through time he became such a popular attraction that people would challenge him just to make a name for themselves.

His uncle's suicide prompted a brief exodus from the world of rap, but he returned and found himself courted by several other rappers to start groups. He first joined the New Jacks, and then moved on to Soul Intent, who released Eminem's first recorded single in 1995. A rapper named Proof performed the B-side on the single and enjoyed working with Eminem so much that he asked him to start yet another group. Drafting in a few other friends, the group became known as D-12, a six-member crew that supported one another as solo artists more than they collaborated. The birth of Eminem's first child put his career on hold again as he started working in order to care for his family. This also instilled a bitterness that started to creep into his lyrics as he began to drag personal experiences into the open and make them the topic of his raps.

A debut record, 1996's Infinite, broke his artistic rut but received few good reviews, as comparisons to Nas and AZ came unfavorably. Undaunted, he downplayed many of the positive messages he had been including in his raps and created Slim Shady, an alter ego that was not afraid to say whatever he felt. Tapping into his innermost feelings, he had a bounty of material to work with when his mother was accused of mentally and physically abusing his younger brother the same year. The next year his girlfriend left him and barred him from visiting their child, so he was forced to move back in with his mother, an experience that fueled his hatred toward her and made him even more sympathetic toward his brother. The material he was writing was uncharacteristically dark as he began to abuse drugs and alcohol at a more frequent rate. An unsuccessful suicide attempt was the last straw, as he realized his musical ambitions were the only way to escape his unhappy life. He released the brutal Slim Shady EP, a mean-spirited, funny, and thought-provoking record that was light years ahead of the material he had been writing beforehand. Making quite the impression in the underground not only for his exaggerated, nasal-voiced rapping style but also for his skin color, many quarters dubbed him the music's next "great white hope."

According to legend, Dr. Dre discovered his demo tape on the floor of Interscope label chief Jimmy Iovine's garage, but the reality was that Eminem took second place in the freestyle category at 1997's Rap Olympics MC Battle in Los Angeles and Iovine approached the rapper for a tape afterward. It wasn't until a month or two later that he played the tape for an enthusiastic Dre, who eagerly contacted Eminem. Upon meeting, Dre was taken back by his skin color more than his skill, but within the first hour they had already started recording "My Name Is." Dre agreed to produce his first album and the two released "Just Don't Give a Fuck" as a single to preview the new album. A reconciliation with his girlfriend led to the two getting married in the fall of 1998, and Interscope signed the rapper and prepared to give him a massive push on Dre's advice. An appearance on Kid Rock's Devil Without a Cause only helped the buzz that was slowly surrounding him.

The best-selling Slim Shady LP followed in early 1999, scoring a massive hit with the single and video "My Name Is," plus a popular follow-up in "Guilty Conscience"; over the next year, the album went triple platinum. With such wide exposure, controversy ensued over the album's content, with some harshly criticizing its cartoon-ish, graphic violence; others praised its edginess and surreal humor, as well as Eminem's own undeniable lyrical skills and Dre's inventive production. In between albums, Eminem appeared on Dre's "Dr. Dre 2001", with his contributions providing some of the record's liveliest moments.

The Marshall Mathers LP appeared in the summer of 2000, moving close to two-million copies in its first week of release on its way to becoming the fastest-selling rap album of all time. Unfortunately, this success also bred more controversy, and no other musician was better suited for it than Eminem. Among the incidents that occurred included a scuffle with the Insane Clown Posse's employees in a car stereo shop, a bitter battle with pop star Christina Aguilera over a lyric about her fictional sexual exploits, a lawsuit from his mother over defamation of character, and an attack on a Detroit club goer after Eminem allegedly witnessed the man kissing his wife. Fans ate it up as his album stood strong at the top of the charts. But the mainstream media was not so enamored, as accusations of homophobia and sexism sprung from the inflammatory lyrics in the songs "Kill You" and "Kim." It was this last song that ended his marriage, as the song's chosen topic (violently murdering his real life wife Kim Mathers) drove his spouse to a suicide attempt before they divorced. Eminem toured throughout most of this, settling several of his court cases and engaging a mini-feud with mini-rapperEverlast.

The annual Grammy Awards nominated the album for several awards, and to silence his critics the rapper called on Elton John to duet with him at the ceremony. In 2001, he teamed with several of his old Detroit running buddies and re-formed D-12. Releasing an album with the group, Eminem hit the road with them that summer and tried to ignore the efforts of his mother, who released an album in retaliation to his comments. After getting off of the road, he stepped in front of the camera and filmed 8 Mile, a film loosely based on his life directed by the unlikely fan Curtis Hanson (Wonder Boys). His constant media exposure died out as well, leaving him time to work on new music.

When he re-emerged in 2002, he splashed onto the scene with "Without Me," a single that attacked Moby and Limp Bizkit and celebrated his return to music. Surprisingly, the following album, The Eminem Show, inspired little controversy. Instead, the popular second single "Cleanin' Out My Closet" told of his dysfunctional childhood and explained his hatred toward his mother in a mannered, poignant fashion. And being Eminem, he followed this up with an appearance at MTV's Video Music Awards that inspired boos when he verbally assaulted Moby for no apparent reason. The Eminem Show was his third successful multi-platinum record, and it was the album that crowned him the most successful Hip-Hop artist of all time.

At the end of 2004, Eminem released his fourth solo album, entitled Encore. The album was not as successful as his previous three, but it still went multi-platinum and boosted his overall record sales to close to 90 million. The album began on a serious note with "Evil Deeds", a song geared towards his father, and kept up this unusual seriousness in songs such as "Like Toy Soldiers", whose message was to discourage violence in the rap industry. The Eminem of old came back in the song entitled "Puke", yet another colourful anti-Kim rhyme.

In 2005, Eminem released what is rumoured to be his last album, and was entitled "Curtain Call: The Hits" and featured many of his greatest hits to date, including three new tracks called "Faq", "Shake That" and "When I'm Gone", the latter two being released as successful singles. Many loyal fans consider this to be the end of Slim Shady, with the rapper putting an end to his alter ego.