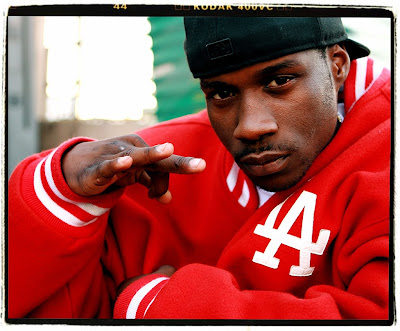 Born and raised in Watts, California’s notorious Nickerson Gardens Projects, Jay Rock got his first encouragement from his music-making relatives, who noticed the impact his deep, melodic voice made on song after song. His hard-working mother filled their home with the classic soul and blues music of such icons as the Temptations, Dramatics, Isley Brothers, Johnny Guitar Watson and B.B. King. She also had an affinity for rap, and enjoyed the music of such trendsetters as Big Daddy Kane and Biz Markie. Jay Rock soon developed an interest in playing keyboards and, at age 12, writing poems. As he grew up in the volatile Watts streets, gangster rap began to take hold. Jay Rock soon started getting into trouble at school, forcing him to attend a number of different schools including the notorious Locke High School. He also endured a harsh reality when cited and incarcerated for violating his area’s gang injunction. Determined not to follow down the same destructive path as many did before him, Jay Rock decided to concentrate fully on his music career, honing his craft. His growing confidence led to a string of heated appearances on neighborhood mixtapes. The gifted rhymer’s clever phrasing, gritty realism, storytelling swagger and powerful voice grabbed the attention of Top Dawg Entertainment boss Dude Dawg. Once in the studio with an independent company backing him, Jay Rock’s output increased and improved. After shopping his demo to a number of major labels, Jay Rock and Top Dawg earned a deal with industry powerhouse Warner Bros. Records. The Warner Bros. executives were impressed with Jay Rock’s distinctive flow, his vivid lyrics and, of course, his “voice”. On his debut LP Follow Me Home, Jay Rock details the treacherous reality of California’s streets on the title cut “Follow Me Home” feat. The Game (who produced the track). On the lead single “All My Life” feat. Lil Wayne, Jay Rock asserts his status as Los Angeles’ next rising star. The video for “All My Life” documents a day in the life in the Nickerson Gardens and helps viewers understand the trials one must take to make their way out of the projects. Jay Rock’s life struggles have made him appreciate what he has already accomplished, turning his childhood talent for writing into a career as a major-label recording artist.

Hottest in The Hood