Difference between revisions of "Ottawa" This article will include information on both Ottawa and Gatineau. Together the 2 cities make up what is called the National Capital Region.

Ottawa is the capital of Canada and the country's fourth largest city, as well as the second largest city in the province of Ontario. In 2005 the population of Ottawa was estimated at 860,928, while the population of the larger Census Metropolitan Area was estimated at 1,168,788, the National Capital Region (Ottawa/Gatineau) has a population of 1,451,415 during the last census (2006). Ottawa lies on the banks of the Ottawa River, a major waterway that forms the boundary between Ontario and Quebec.

The Ottawa Police have been accused of amid racial profiling amongst the cities visible minorities. In 2004, an 18-year old black teenager was driving home in his mothers Mercedes-Benz with his window down when an Ottawa Police officer immediately did a U-turn and began to follow him. The officer pulled over the teen for no apparent reason.

There have been several cases of alleged police brutality by members of the Ottawa Police services. Most notable, Constable Martin Cardinal was caught on camcorder banging a female's head on his cruiser. Cardinal was convicted, but ordered to rejoin the force. In 2005, yet another assault by members of the Ottawa police was recorded on camera. Constable Shane Henderson was caught on tape assaulting a civilian from Montreal at a Tim Hortons coffee shop. The case is still under investigation. 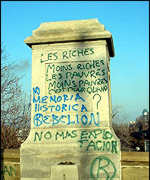 A city council committee wants Ottawa's anti-graffiti budget more than tripled next year to almost $2.5 million but was persuaded to save the city's two legal graffiti walls. The transportation and community and protective services committee unanimously endorsed a plan Thursday that would boost the city's $585,000 budget for graffiti prevention and removal by $1.9 million. But the plan was revised so it would not wipe out a wall downtown and one in the city's south where graffiti is allowed. The plan must go to full council for final approval. At Thursday's meeting, a number of speakers favoured cracking down harder on illegal, unwanted painting and scribbling on structures around the city that they say hurts tourism and civic pride. "Nail the little donkeys that are doing the damage," said Rob Sproule, chair of the city's business advisory committee, who said he is sick of the problem.

Ottawa is home to the Ottawa Senators of the National Hockey League.