The West Side (W/S) Tree Top Pirus (also known as "West Side Trees" and "TTP") are an African American street gang located in the western section of Compton, California. Members of the TTP are known to sport the colors Burgundy and Olive Green. This gang is nestled into a small community on the Northside of Compton in an area just south of Rosecrans. Their territory is bordered by several other gangs. On the North side of the Trees are the Fruit Town Pirus, to the South are the Palmer Blocc Compton Crips. The west side of the Tree Top Pirus gang territory extends to the Cedar Block Piru gang's eastern territory border. On the East Side of their territory are the Santana Blocc Compton Crips. The Tree Top Pirus gang has control over the area from Rosecrans Ave. to the North (Between Willowbrook Avenue, and Wilmington Avenue), Compton Blvd on the South (Between Willowbrook Avenue and Wilmington Avenue just South of the E. Palmer St. and E. Arbitus intersection - this includes E. Magnolia Street, and the area South West of the intersection of N. Aranbe and W. Arbitus St.- this includes W. Palmer St., W. School Street, W. Magnolia Street and N. Paulson Ave and Wilmington Ave on the West. They are enemies of Original Swamps Compton Crips, Palmer Blocc Compton Crips, Santana Blocc Compton Crips, Mona Park Compton Crips, Kelly Park Compton Crips and the Neighborhood Compton Crips. Over the years, the Tree Top Pirus have shown hostility towards other Piru and Blood sets as well such as the Fruit Town Pirus, Cedar Block Piru, 145 Neighborhood Pirus, 151 Original Block Pirus and the Bounty Hunters Watts. They are also known to engage in warfare with Hispanic gangs such as the Compton Varrio 155, Compton Varrio Segundo, Compton Varrio Tres, Compton Varrio Largo 36, Compton Varrio 70's and the Compton Varrio Tortilla Flats. Their most fierce rivalry is with the Compton Varrio Tortilla Flats that has lasted over 20 years due to the long going race wars in South Central, Los Angeles. Their allies include the West Side Piru, Elm Street Pirus and Campenella Park Pirus. 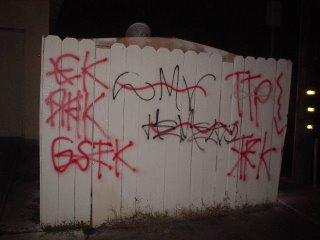 The 800 Blocks of Culver Avenue and Acacia Avenue.